Crimes of Power & States of Impunity: The U.S. Response to Terror 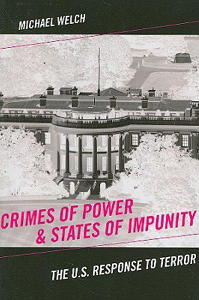 Since 9/11, a new configuration of power situated at the core of the executive branch of the U.S. government has taken hold. In Crimes of Power & States of Impunity, Michael Welch takes a close look at the key historical, political, and economic forces shaping the country's response to terror.

Welch continues the work he began in Scapegoats of September 11th and argues that current U.S. policies, many enacted after the attacks, undermine basic human rights and violate domestic and international law. He recounts these offenses and analyzes the system that sanctions them, offering fresh insight into the complex relationship between power and state crime. Welch critically examines the unlawful enemy combatant designation, Guantanamo Bay, recent torture cases, and collateral damage relating to the war in Iraq. This book transcends important legal arguments as Welch strives for a broader sociological interpretation of what transpired early this century, analyzing the abuses of power that jeopardize our safety and security.