Scapegoats of September 11th: Hate Crimes and State Crimes in the War on Terror 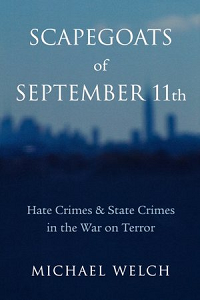 From its largest cities to deep within its heartland, from its heavily trafficked airways to its meandering country byways, America has become a nation racked by anxiety about terrorism and national security. In response to the fears prompted by the tragedy of September 11th, the country has changed in countless ways. Airline security has tightened, mail service is closely examined, and restrictions on civil liberties are more readily imposed by the government and accepted by a wary public. The altered American landscape, however, includes more than security measures and ID cards. The country's desperate quest for security is visible in many less obvious, yet more insidious ways. In Scapegoats of September 11th, criminologist Michael Welch argues that the "war on terror" is a political charade that delivers illusory comfort, stokes fear, and produces scapegoats used as emotional relief. Regrettably, much of the outrage that resulted from September 11th has been targeted at those not involved in the attacks on the Pentagon or the Twin Towers. As this book explains, those people have become the scapegoats of September 11th. Welch takes on the uneasy task of sorting out the various manifestations of displaced aggression, most notably the hate crimes and state crimes that have become embarrassing hallmarks both at home and abroad.