Flag Burning: Moral Panic and the Criminalization of Protest 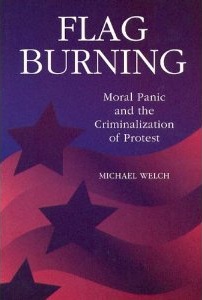 Responses to flag burning as a particular form of street protest tend to polarize into two camps: one holding the view that action of this sort is constitutionally protected protest; the other, that it is subversive and criminal activity. In this well-researched and richly documented volume, Welch examines the collision of these ideologies, and shows the relevance of sociological concepts to a deeper understanding of such forms of protest.

In exploring social control of political protest in the United States, this volume embarks on an in-depth examination of flag desecration and efforts to criminalize that particular form of dissent. It seeks to examine the sociological process facilitating the criminalization of protest by attending to moral enterprises, civil religion, authoritarian aesthetics, and the ironic nature of social control. Flag burning is a potent symbolic gesture conveying sharp criticism of the state. Many American believe that flag desecration emerged initially during the Vietnam War era, but the history of this caustic form of protest can be traced to the period leading up to the Civil War.

The act of torching Old Glory differs qualitatively from other forms of defiance. With this distinction in mind, attempts to penalize and deter flag desecration transcend the utilitarian function of regulating public protest. Despite popular claims that American society is built on genuine consensus, the flag-burning controversy brings to light the contentious nature of U.S. democracy and its ambivalence toward free expression. The First Amendment of the U.S. Constitution is often viewed as one of the more unpopular additions to the Bill of Rights. One constitutional commentator underscores this point by noting that the First Amendment gives citizens the right to tell people what they do not want to hear.